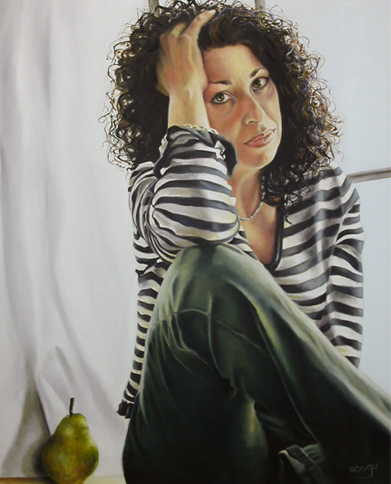 Your cherished photographs
come alive with my realistic style
and artistic vision.

I truly can’t remember when I didn’t draw !

I think I was born and raised with a need to visually express myself.

Even after years of pursuing a commercial art career in advertising and interior design, somehow I came back to my roots- drawing and painting !

Whatever I see, I interpret with the deliberate intention to change the viewer’s observation of everyday beauty. What is taken for granted is brought to a dramatic forefront.  Opening your eyes to a fresh perspective brings a wonderment of the commonplace and a new appreciation of light, color, and detail. Whether we see beauty on the soft folds of fabric, the rough chop of bark, or the mottled skin of a wrinkled grape, it is our everyday world that holds a fascination for me.

2003: Representation at the West End Gallery in Montreal
2003: Solo exhibition at the Four Points Sheraton Hotel
2003: Invited by the by the Federation of Combined Jewish Appeal to donate an original work designed specifically to raise money for education in Israel. One of only 24 artists in Montréal chosen to participate
2004 to Present: Representation at The Shayne Gallery in Montreal
2004: Federation of Combined Jewish Appeal donation of original still life oil on wood
2004: Accepted membership into the Society of Canadian Artists (Vancouver)

2007: Group show at The Shayne Gallery of small still-life paintings
2007: Study in the art of portraiture at a professional photography studio
2007: Representation at the Caesarea Gallery in Boca Raton, Florida

2007: Group show at The Shayne Gallery of small still-life paintings